This morning I had to dash on before breakfast to upload my card for the DCM dare from last week as I kept forgetting to take the photograph so this week I am being super organised and have just spent a happy half hour cheering myself up with some cardmaking. I have the chesty/lurgy bug thing that's going around our school so spent the day on the sofa watching trash on the television but now I'm feeling a bit better so thought I would have a play in my room.
The dare this week is to use stripes and I found this fabby striped paper in a pack which went perfectly with the Santa paper and the Santa toppers. I bought the felt one a couple of years ago in a sale but the first one I made myself based on one that I had seen in a Scrapbooks Etc magazine quite a few years ago. 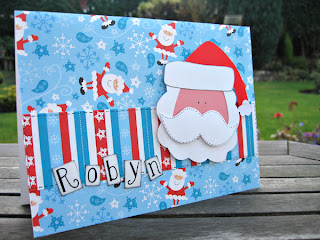 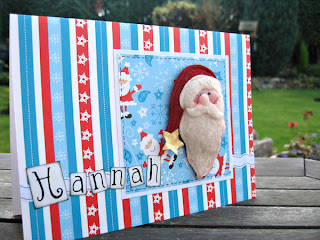 Did any of you lovely crafters buy any of the new Sugar Nellie stamps that were released last night? I bought a few (okay then, more than a few!) so over the Christmas holidays when I'll have oodles of time, I'm hoping to play with them. I decided against buying the Christmassy one but had to have the wee little Scotty doggie and I think he'll be finishing my Christmas cards off for this year.

I love these cards, they're perfect for children!

Great cards, love the stripy paper. I bought a few of the new Sugar Nellies can't wait for them to come especially the boy with the guitar and the cowboy, they are fab

Wow great Cards. The colors of paper are son fabulous. Love it.

I love these cards Andrea. Particularly the paper pieced FC. I managed to restrain myself over the Nellies, but don't think it will be for long...

aaaawww - these are so cute!

Some of the new Nellies and Maggies did indeed end up in my shopping basket! Looking forward to receiving them in the post! The wee doggie is also coming to live with me and my doggie! Hooray!

I absolutely love your choice of paper for these cards....fabulous!!!

Rainbow image by Kate Hadfield at The Lilypad